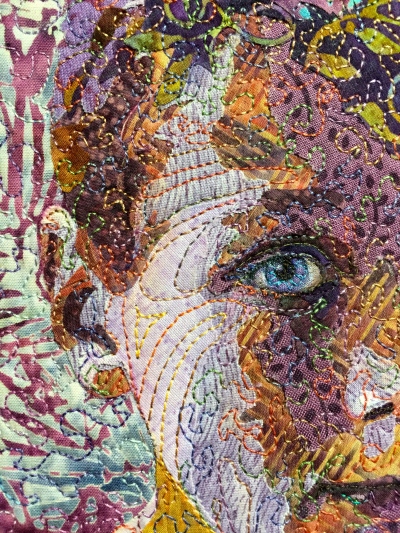 A couple of weeks ago I gave a teaser shot of my grandson Chase’s completed portrait. This quilt was 3 years in the making, due mostly to the extended periods of time it spent hanging on my design wall waiting for attention. It’s completion came about all of a sudden and for two reasons: 1) acute guilt and 2) letting go of my idea of what it should be and seeing the portrait for what it actually was – a simple, quietly fanciful study of a young boy.

The idea for Chase’s portrait came about in response to one I had done earlier of his sister, as part of a challenge to create a quilt using one color. For that quilt I used a fusible technique I had recently learned from Lenore Crawford in her class.

Natalie’s quilt garnered a fair amount of attention, even being included as part of an article in Quilting Arts Magazine (our group was featured!). With all of that hoopla the Grandma in me just had to be fair, especially since at the time Chase seemed to enjoy time spent in the sewing room even more than his sister.

So I had Chase pose for a few “head shots”. We chose one of the photos and after some discussion he decided purple and orange would be the perfect colors for his quilt. Of course and why not? 🙂 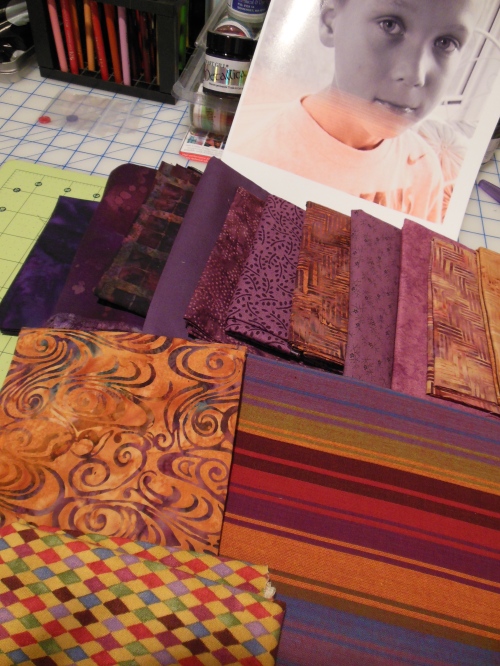 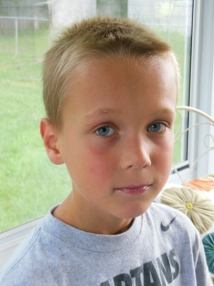 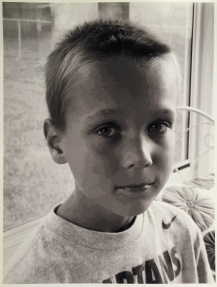 I began by posterizing the photo to accentuate the value ranges and then outlined the major areas in black marker. (The 8×10 photo was kept to scale and not enlarged). Then I made a tissue paper tracing, a freezer paper tracing and also traced the design directly onto the muslin fabric base. After that the basic construction method was to use the freezer paper as a template for cutting fabrics already backed with fusible web and then to iron the fabrics into place. Along the way I also altered the fabric image to suit my fancy and fused serendipitous scraps that seem to fit or fill certain areas.

And now back to the topic of trying to make the portrait be something it wasn’t. I wanted it to be “arty” in design so I decided to place Chase against a large back window…which then seemed to need something in it to offset the emptiness of the shape. Hence, the rectangle.

Farther along I thought of filling the window with quilted images representative of Chase’s interests – chess pieces, hockey sticks, even a parrot perched on top of his head. Clearly, by that point I was over reaching and losing my way!

In the progression above you can see how fabric paint was used around the eyes for definition.

Another problem I had was making the corner he stands in seem like a receding corner and not a flat wall. Fabric choices and quilting lines were done and redone. True success was never achieved but I’m okay with that.

Until finally this past spring when Chase was visiting and I saw his wistful glance at the unfinished portrait still hanging on the wall. In an instant it became clear what my priority needed to be and I suddenly knew that the quilt was nearly complete if I would just crop it to a smaller size and concentrate on the most important part of the portrait – him. 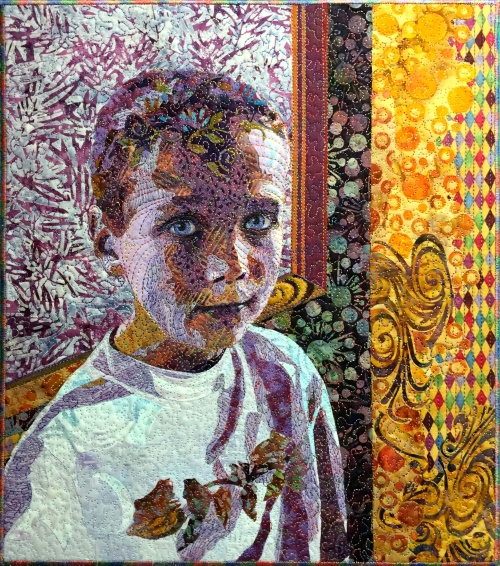 Within a week the quilt was done and it’s now at the framers being placed under glass for preservation. I don’t usually frame my fabric art under glass but this one is soon to be living in an eleven year old’s bedroom. Enough said.

This grandma is feeling good again!